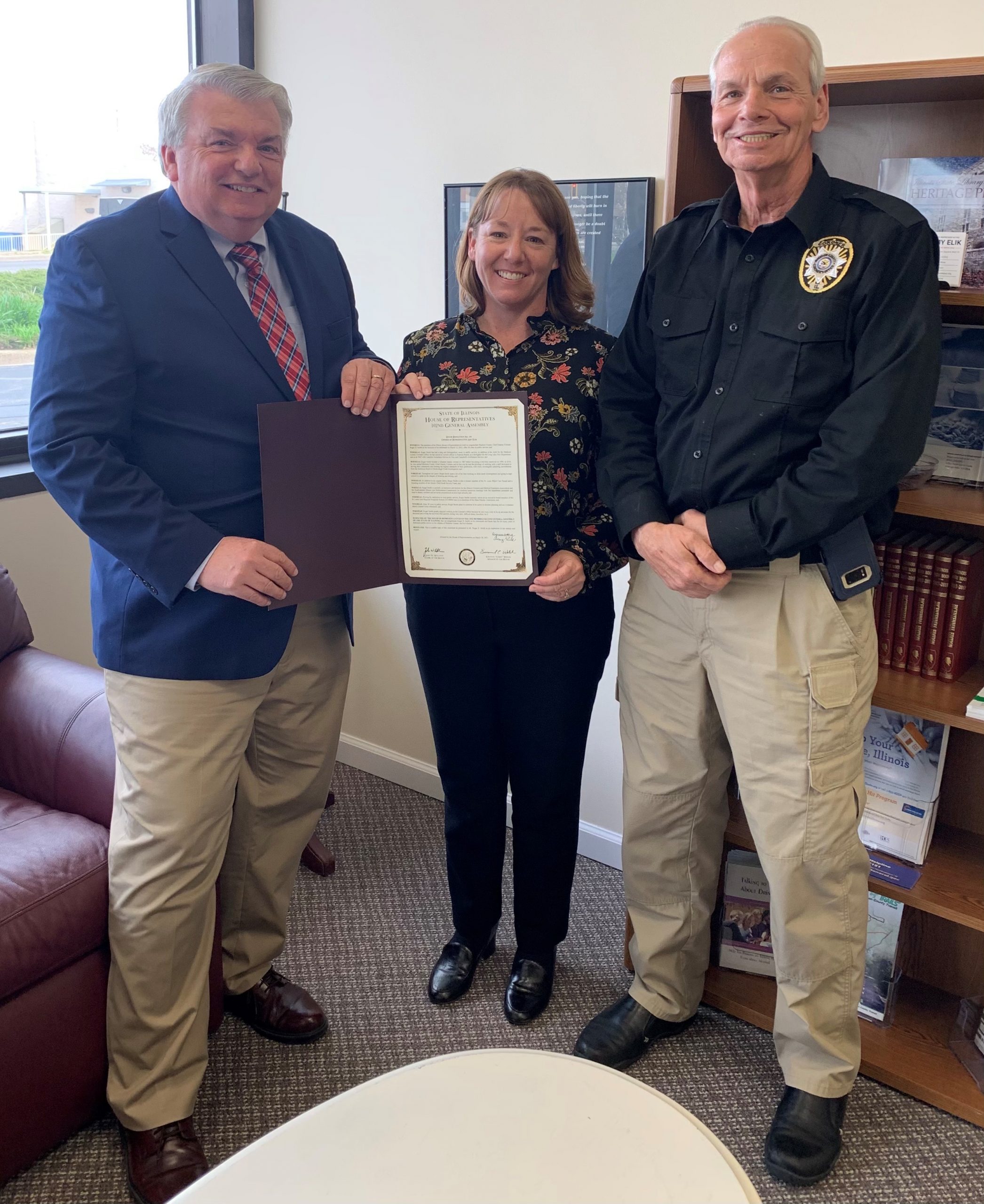 “I have known Roger for a long time, his hard work and dedication to Madison County will be missed,” said Rep. Elik. “He served the taxpayers during the most difficult times in their lives and he could not have done so without his colleagues and wife by his side. He was a team player, he gives credit to his accomplishments throughout his career as a result of teamwork. Again thank you for serving Madison County I wish Roger a joyful retirement.”

The members of the Illinois House of Representatives wish to congratulate Madison County Chief Deputy Coroner Roger D. Smith on the occasion of his retirement on March 12, 2021, after 38 years in public service; and

WHEREAS, Roger Smith has had a long and distinguished career in public service; in addition to his work for the Madison County Coroner’s Office, he has served as a police officer in Pontoon Beach, as a firefighter for the Long Lake Fire Department, and as an EMT with Laughlin Ambulance Service in Troy and Campbell’s Ambulance Service; and

WHEREAS, Roger Smith became a volunteer deputy coroner in 1987 before becoming a full-time employee in 1989; in 2010, he was named Madison County Chief Deputy Coroner and in that role he had the privilege of working with a staff dedicated to serving their community and meeting the highest standards of their profession, with every investigator achieving accreditation from the American Board of Medicolegal Death Investigators; and

WHEREAS, Throughout his career, Roger Smith spent a lot of his time working on child death investigations and going to high schools to speak on the dangers of drinking and driving; and

WHEREAS, In addition to his regular duties, Roger Smith is also a former member of the St. Louis Major Case Squad and a founding member of the Illinois Child Death Review Team; and

WHEREAS, Roger Smith is currently an instructor and lecturer for the Illinois Coroners and Medical Examiners Association and the Southwestern Illinois Law Enforcement Commission; he conducts numerous trainings with fire department personnel and reserve deputy coroners and pre-prom presentations at area high schools; and

WHEREAS, Proving his dedication to local public service, Roger Smith currently serves as an executive board member of the St. Louis Area Regional Response System (STARRS) and is co-chairman of the Mass Fatality Committee; and

WHEREAS, After 38 years in public service, Roger Smith plans to continue to be active in disaster planning and as a volunteer deputy coroner in his retirement; and

WHEREAS, Roger Smith greatly enjoyed working in the Coroner’s Office because he saw it as a way to be an advocate for the deceased and to help the survivors find answers during very dark, difficult times; therefore, be it

RESOLVED, BY THE HOUSE OF REPRESENTATIVES OF THE ONE HUNDRED SECOND GENERAL ASSEMBLY OF THE STATE OF ILLINOIS, that we congratulate Roger D. Smith on his retirement and thank him for his many years of dedicated public service to the citizens of Madison County.

House Resolution 154, sponsored by Rep. Elik was adopted by the House of Representatives on March 18, 2021 to congratulate Madison County Chief Deputy Coroner Roger D. Smith on the occasion of his retirement.